In her previous research she has provided a critique of Michael Rothberg’s multidirectional memory model outside of global Holocaust remembrance by analyzing the peculiarities of transnational intertextuality in Seamus Heaney’s early poetry about the Troubles in Northern Ireland. She has also written on postcolonial professions of complicity and the uses of visual memory in contemporary poetry.

Maria’s dissertation project “Postcolonial Mnemopoetics: Reading the Poetry of Seamus Heaney, Bernardine Evaristo, Wopko Jensma, Ingrid de Kok and Derek Walcott through the Lens of Transcultural Memory” investigates the ways in which contemporary postcolonial Anglophone poetry constructs comparative imaginaries of cultural memory across borders and poetic forms. Her choice of representative poets from Northern Ireland, South Africa, the Caribbean and metropolitan London casts a wide net across time and space in order to capture the diverse processes of cultural memory formation in a world literary context.

Maria is particularly interested in exploring the intersections between postcolonial memory and world literary systems, the relationship between poetry and the visual arts, book materiality and the transnational circulation of print, as well as the use of poetic forms as carriers of critical cultural memory discourse. 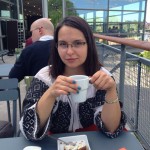