His current research in the area of literature and trauma mainly engages with the question of how the catastrophes that strike day in, day out, whether they form the legacy of well-recognized repressive political systems like Nazism (for instance in Michael Chabon’s The Final Solution) or Apartheid (J. M. Coetzee), or amount to less tangible forms of un-freedom (as in Herman Melville’s Bartleby), make it impossible to achieve more than a very limited ability to act for change, a point he explores in the context of Judith Butler’s theory of the inevitably citational basis of social agency (we are always constrained by something that lies outside our control but this something is also the motor of our ability to act). From a more strictly literary perspective, he is interested in how the ethical effect of literature must be situated in what he sees as the reader’s syntagmatic participation in the text rather than paradigmatic identification with protagonists. 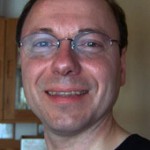