“Remembering the Past and Collective Melancholy in Orhan Pamuk’s Istanbul“; given by Prof. Hande Tekdemir (Boğaziçi University)

“For me [Istanbul] has always been a city of ruins and of end-of-empire melancholy. I’ve spent my life either battling with this melancholy or (like all Istanbullus) making it my own,” contends Orhan Pamuk in Istanbul: Memories and the City (6). Pamuk’s conception of hüzün (collective melancholy) with respect to Istanbul’s cityscape is a complicated process – one that can be divided into three components: 1) a melancholic reaction to the Ottoman past as the lost object; 2) a melancholic reaction to a lost object that takes the form of an abstraction (predicated on the “lack” experienced by the Turkish writer in relation to what appears as the western literary canon on Istanbul, but in reality, is a more general articulation of belatedness to (European) modernization as a historical process; 3) the projection of this collective melancholy from the self (Turkish writer / natives of the city / Turkish society in general) to the cityscape so that the city is both the object and subject of melancholy. Being a city of loss, but also a means for perpetual mourning for the remains, Istanbul, in Orhan Pamuk’s work, is reclaimed as an interstitial space in between past and present, tradition and modernity, mourning and melancholy: the threshold experience that keeps bringing back home.

I would like to interrogate the significance of this local articulation of melancholy for a larger audience. How can Istanbul’s melancholy be globally “translated,” especially since it is a city that has been the imperial centre of colonization but later faced the danger of being colonized? How would this complicated background function in comparison with other postcolonial and post-imperial texts and contexts? Does it, for instance, have resonances with racial melancholy experienced by the multi-ethnic population in the United States, as configured by Anne Anlin Cheng in The Melancholy of Race, or is it in any way comparable to the English post-imperial metropolitan existence as demonstrated by Paul Gilroy in Postcolonial Melancholia? On the other hand, could it have resonances with (postimperial) nostalgia, and perhaps be related to what Svetlana Boym argues for St. Petersburg in The Future of Nostalgia?

In other words, should Istanbul’s hüzün, as reflected in Orhan Pamuk’s work, be perceived from a local/national or global perspective? 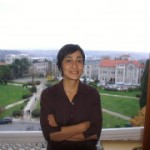 Hande Tekdemir is an Assistant Professor of English in the Western Languages and Literatures Department of Bosphorus University. Her research interests are modernism, trauma studies, postcolonial theory, and urban literature. Her recent publications include “Uncanny Encounters with the City and the Self in Western Travelogues on Istanbul” in Whose City Is That (CSP, 2014); “Post-Frontier and the Re-Definition of Space in Tropic of Orange” in Blast, Corrupt, Dismantle, Erase: Contemporary North American Dystopian Literature (Wilfred Laurier UP, 2014); “Magical Realism in the Peripheries of the Metropolis: A Comparative Approach to Tropic of Orange and Berji Kristin: Tales from the Garbage Hills” (The Comparatist, May 2011). She is currently working on a project that focuses on the literary representations of the Irish Famine in contemporary eye-witness accounts.

All are welcome. Admission is free, and registration is not required. For more information, please contact Stef Craps.